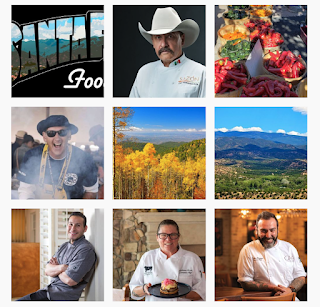 Last month while going through my social media accounts I noticed that one of the accounts I follow, Santa Fe Foods TV, had made an announcement that their Pilot episode of the Santa Fe foods docuseries was uploaded to YouTube. The pilot episode is about Chef Fernando Olea and Sazon.  Chef Olea along with Chef Martin Rios were recently announced as finalists for the James Beard Foundation’s 2022 Best Chef Awards, in the Southwest region.  I was curious about the production so I spent the next 35 minutes watching this spectacular presentation of our city Santa Fe, Chef Olea and his passion for life and the creation of fine food and the experience of dining at Sazon.  I cannot tell you how well this production is curated, you just need to see it for yourself.

Immediately after the show, I wrote to the Producer, Greg Zoch, and told him how well it was done and we agreed to an interview.  Greg is like many people who put down roots in Santa Fe; they were introduced to the city either as a child or young adult and they were amazed at the natural beauty of the mountains, the history of the city, the cultural diversity which presents itself in art, music, architecture and food.

The concept of Santa Fe Foods TV came one evening when Greg and Teresa Zoch were dining with Lawrence and Suzanna Becerra at Sazon.  The conversation germinated the idea that “Wouldn’t it be a great idea to create a docuseries similar to NetFlix Chef’s Table” highlighting great Chefs and Food Experiences in Santa Fe. Santa Fe does have Global dining experience credentials for a city of its size. There are more restaurants per capita than most cities and definitely more award winning chefs and restaurants than cities 10 times its size.  Many of the finest chefs in America blazed a trail through Santa Fe. Some stayed and some went on to NYC, Boston and Chicago.  From that dinner and discussion, Santa Fe Foods was created and launched.

Greg and Teresa Zoch had a set of criteria that would have to be met in order to differentiate it from other Food series.  The formula was to highlight Santa Fe, the Chef and the Food and Dining Experience.  Each episode would focus on the journey of the Chef, their struggles, their successes, their family, their passion for creative cuisine, creating dining experiences and how their life has contributed to their culinary creations.  And, of course, would have to highlight our resplendent City Different.

The pilot Episode 1 features Chef Fernando Olea and Sazon. The first impression is that someone took extreme pride in creating this production. The narration and film production values are nothing less than spectacular.  The story starts with Chef Olea telling us of his passion for Santa Fe and his journey to get there.  The series is broken into chapters that are individual to the Chef.  As you watch, you understand the Chef’s journey and how it has contributed to his success and why his story is important to tell. By the time you come to the end you feel you developed a new relationship with Chef Olea.

Chef Olea is not a young man and has been part of the Santa Fe Culinary scene for 30+ years.  I first met Chef at his restaurant Epazote, which was in the old La Tertulia location.  Every time we went there Chef Olea would make it a point to greet us and allow us to try a mole or a dish he had just created.  Today his hospitality and kindness has not changed.  When you go to Sazon you are treated special, like family.

Greg and Teresa look forward to completing Season One. They are currently in discussions with broadcast and streaming platforms, for the 6 part series.  Other Chefs to be featured in Season One are Mark Kiffin (The Compound), Martin Rios (Restaurant Martin), Cristian Pontiggia (Sassella), Kathleen Crook (Market Steer Steakhouse) and Sllin Cruz (Geronimo).  Each of the episodes will focus on the Chef’s journey and their drive for excellence.

When I was finishing my interview with Greg, he asked me to guess the remaining five Chefs on Season 1, interestingly I missed three of them which leads me to believe that in Santa Fe there are so many great Chefs that can be featured in Santa Fe Foods seasons to come. You can follow on Instagram: https://www.instagram.com/santa_fe_foods_tv/

For more on the Santa Fe Foods, go to https://santafefoods.tv/ and you can watch the Pilot Episode on YouTube here: https://youtu.be/gsoqzEaU518

Posted by topcheftrail at 7:50 AM