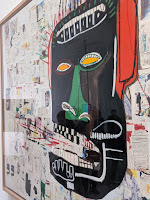 November 10, 1979 we were married in Newport Beach, CA and honeymooned in Hawaii.  Well 40 years later and a lot of trips all over the world eating the best food and drinking great wine we picked to spend our 40th in NYC.  Why NYC? We had not been there together in over 5 years, there is a lot to see, eat and drink and we were assured to get an opportunity to eat at World Class Restaurants.
We stayed at the AC Hotel, Times Square which is part of the Marriott family.  The AC is in a great location to catch the subway or to get around on foot.  The hotel is definitely designed for a younger spirited person with a contemporary look and an upbeat Bar and Restaurant including a spectacular rooftop bar.

We were there for 5 days and covered over 22 miles walking and over 100 miles on the subway and Lyft.  Some of the great things in NYC is the Subway, some people have the perception that it is dirty or dangerous, on the contrary it is safe and the fastest way to get around bar none.  On Saturday we spent the morning at the MOMA to see the new addition to the museum. After several hours looking at all the contemporary art exhibits we took the Subway downtown to the Flatiron district to grab lunch at abcV which is located is in the ABC Carpet on E19th,
abcV is one of Chef Jean-Georges Vongerichten many terrific restaurants in NYC and one of Three in in ABC Carpet.  Chef Jean-Georges is a World Class Chef with 2 Michelin Stars and has won many Culinary Awards including 8 from James Beard Foundation. Point is he is very talented and accomplished and best of all his restaurants are consistently great.
The restaurants at ABC Carpet are all very popular and you want to make sure you have a reservation.  abcV is Vegetarian and on a Saturday tends to be very busy but we lucked out and scored seating at the counter which if you are a foodie is the best place to sit. At the counter you get the entire epicurean experience specifically watching these great young chefs make the dish you are going to eat.  There is great preparation and care that goes into each dish at fine dining restaurants.
We started with the Smoked Fingerling Potatoes with Lemon and Herb Aioli.  These were crisp, smokey and fresh the Aioli was yogurt based.  This is a small plate so there is no guilt in eating these great crispy and smokey potatoes.  For the main course we both picked the Dosa with Egg, Cheese and Sambal.  A Dosa basically is a crepe that meets a burrito.  This was a fantastic dish I made sure to have some extra Sambal. The art of eating a dish like this is to take very small bites and savor each and every chew.
On the way out we went through ABC Carpet and like usual JoAnn wanted more time to check out some of the fantastic home furnishings.  I was busy updating Instagram posting my meal @topcheftrail and the alarm went off.   Security was immediately there talking to him and and his wife, soon the manager came over and the discussion became joking and friendly.  As they were talking I Realized it was Chef Jean-Georges.  It took me a few minutes but I finally got up some guts and subtly interrupted and told him we were spending our 40th Anniversary having dinner at his first restaurant JoJo.  He asked my name and the date and time of the reservation but honestly did not believe he would remember.


The big evening has come and we have a reservation at JoJo which is Chef Jean-Georges first restaurant in 1991.  It's success launched Chef JGV's fine dining restaurant dynasty.

JoJo's is a small restaurant which has been recently updated.  The front entry was decorated with all the Fall harvest colors with
flowers and multi-color pumpkins. the restaurant is located in an exclusive residential neighborhood on the Upper East Side on 64th Street.  It is very popular with both locals and tourists and reservations are recommended.
Once sat our server Natasha came over to welcome us and started us thinking about cocktails.  Natasha was with us all evening and was great throughout the meal.
We started the meal with two of their great cocktails JoAnn had the Vodka Thyme Lemonade that she just loved. and I had the Ginger
Margarita.  I love Ginger but never had it in a Margarita, it was served in a Playboy tumbler and it tasted terrific.  Ginger and Lime is one of the great taste combinations.
For dinner we ordered the 2017 JGV Pinot Noir made by Chapter 24 in Dundee, OR.  Pinots from Willamette Valley are some of the best in the world and Jean-Georges had decided to put his name on a very good one.  This wine was so good I ordered a case of a similar vintage from Chapter 24's representative Rose and Arrow Estate.

We both ordered the Warm Three Grain Salad with Mushrooms, Delicata Squash and Green Chile Dressing.  We agreed that this is a salad that we have never even had something that resembled the quality and fine taste this had.  It was important to eat it as slow as possible just to savor every bite.
Each day JoJo has a daily classic, a dish which has been made famous by Chef.  It was Sunday and to my pleasure it was an Alsatian Lamb Shank Baeckoffe which is slow cooked in a Dutch Oven, before serving the present it to you in the dish and let the steam and the fragrance give you a preview of coming attractions😀.  I love lamb shanks and this did not let me down it was tender and seasoned to perfection.  Again I took my time to enjoy the entire dish one bite at a time.
JoAnn had the Roasted Black Sea Bass, Spiced Egg Plant, Fingerling Potatoes and Cucumber Salad.  Black Sea Bass is a delicacy of fish, this was perfectly roasted and
with a beautiful crispy skin and moist white meat.  The perfect dish.  As you see in the pictures these are not small plates they are very substantial and filling.  Our Pinot paired extremely well with both our dishes.
So far this was the best choice we could have made for our special evening.  The service was amazing, we had enjoyed our wine and excellent meal but it was our big anniversary night and they did have Carrot Cake so we could not resist.  Bummer, by the time we ordered they had run out so we picked a Butter Scotch Pudding with Caramel Creme Fraiche and Sea Salt.  Sounds Sinful!


I will digress, during dinner we had met the Manager Andrea.  I told her our story of running into Jean-George and shared our experience of abcV.  Andrea is one of those employees that really loves her job Although the restaurant was busy she took some extra time getting to know us, both Natasha and Andrea really made the evening special.
Oh Oh Surprise😍 they did have Carrot Cake which they brought out with the Butter Scotch Pudding.  What are we to do, we were presented the best of 2 worlds, Carrot Cake and Butter Scotch Pudding.  This was going to be a project and it took a while to even put a dent in these amazing desserts but we put a pretty big dent and left there feeling a little guilty.
Overall at both restaurants the experiences although different were both great.  Both had great service although Natasha and Andrea were the best, the food exceeded our expectations and the drinks were fun and tasty.
Posted by topcheftrail at 5:23 PM