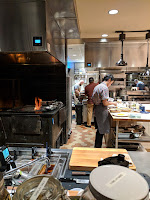 I wanted to celebrate my wife's 39th birthday some where that she had not been to in a long time and that was Austin Texas.  Austin has become one of the fastest growing cities in the US due to the many companies that have moved there and new companies that have spawned themselves out of UT and the demand for tech solutions.  With growth comes great food.  Ten years ago Austin was only really known for Barbecue and Tex-Mex.  But today there are at least 10 restaurants with national attention and 25 more that are truly fantastic.  With all those choices I went to my trusty James Beard award list and settled on Barley Swine whose Chef Owner is Bryce Gilmore is a 2018 James Beard  Semi-Finalist. 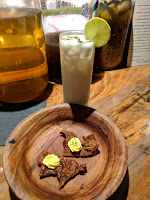 Since it was such a big night we went for the 10 course tasting menu and asked to be sat at the chef's counter to see all the action in the kitchen.  My wife also paired each of the dishes with wine (Picture of menu at end with pairings) so I became the designated driver.
Our server Cameron was a Barley Swine veteran and was very knowledgeable about the menu and the thought that went in to each of the dishes.  Tasting menus require an open mind and you will have to eat something that you are not quite use to.
We started with an amuse-bouche of hamachi in a cold spicy tomato broth,  fresh a good way to start the meal.  I ordered a fun cocktail Thai One On made of gin, coconut milk and lemongrass it was perfect refreshing drink for the upcoming meal.  While waiting for our drinks, another little nibble came to the table which was a play on the chicken and the egg, deviled egg on a chicken skin crackling.  Deviled eggs definitely is not something I eat at all but your there, you try it, you love it, yumm.

Finally the first course came out Blue Claw Crab with shishito and habanada.  It was a crab salad with slices of habanaro and a shishito gelato.  It was cool, spicy, veggie, creamy, overall very tasty.  Second course was a Squid slaw with avocado puree, cucumber and sesame sticks.  Not often you see slaw and squid but it was another hit, especially like the sesame stick it added some texture and some roasted nuttiness.

Next was a shishito pepper stuffed with
cheese and deep fried or a Fried shishito pepper tamale.  You take some lime give it a squirt and pop it into your mouth.  It was crunchy, medium spicy and creamy all at the same time, a really cool cooking idea.

Marinated shrimp was up next shrimp ceviche that becomes part of a shrimp salad with apple and lemongrass with a rye crisp to add texture and flavor.

As you can start seeing the entire menu is something you would never come up with yourself.  I feel I am a creative cook, but honestly these ingredients put together change the dynamic of each component to make a very unique taste.  This is when you know you are dealing with a great chef and team.
Next up, Red Snapper with mustard greens and basil that is then covered with
a steaming Miso tea.  Not only is this a beautiful creation it is also what I would call performance cooking, where you take several components together and add another while table side to make an completely new dish.  This is a 2 part dish where you first eat the fish then swirl the Miso tea and drink it.  Very satisfying!
Time for another off menu amuse-bouche a bite spoonful filled with a shitake dumpling, shitake mushroom, watercress and other goodness.
I love dumplings but this took it to a new level with the mushroom and the creamy egg scramble all in a spoon bite.

Now we move into the bigger bites and we started with smoked quail with yogurt, quince and granola. I am not really a fan of eating quail but this was delicious.  It was the second time we had it this year, the first time was when Dominique Crenn served it at Beast and now here we have it again just as good as the first time and add it with the granola you get a contrast in texture and an addition of some nuttiness.  The yogurt and fruit served as a contrast in temperature which I think should be done more often.  the quail was perfectly cooked and very easy to eat and enjoy.

We finished the main meal with Dry aged Akausha ribeye which I suspect was sous vide first then roasted.  The Akausha beef comes from the
Japanese brown cow, it is considered wagyu.  Although it was very flavorful it was not as tender as I thought it would be.  The dish came with deep Fried crisp tater tots that gave some texture and there was a bone marrow cream sauce.  Overall a lot of meaty flavor very rich and tasty.

Not one but 2 desserts first was the Texas tarragon panna cotta with apple and cardarmom, I loved it!  the second was Butternut mousse, mixed with oats and fenugreek ice cream.  Fenugreek is an herb and i guess it has
become trendy to use it in ice cream.

Barley Swine is well worth going just for a meal or to experience the Chef's counter and the tasting menu.  It was great to celebrate another one of wife's 39th birthdays there, I think great food keeps her young.

The night kept on going and we ended up at the Continental club for an amazing night of Rockabilly with Reverend Horton Heat and drinking spicy Dos Equis.  We were 5 feet from the stage and the reverend put on an amazing show till 1 am.  This guy had swagger!
Posted by topcheftrail at 4:19 PM