Nashville was on JoAnn's bucket list and we chose to go over a weekend when they were having Nashville Boogie at Gaylord Opryland.  Nashville Boogie is a celebration of Mid Century America.  Folks living this life get a fantasy weekend of Fashion, Art and Music to celebrate 50's and the James Dean culture.  This period came back to revisit us in a serious way in the later 70"s with the Rockabilly movement which was the predecessor of Punk.  Rockabilly music is fast paced, guitar riffing and real Bass Playing raucous fun.  This period was huge for Jeans, Tattoos, White Tee Shirts and Embroidered Jean and Leather Jackets.  So in essence we used Nashville Boogie as a catalyst to go to Nashville.

First night we got there we were downtown near Broadway which is Nashville Country Music Party Center, there are bright lights, honky tonk bars, tons of people having fun, lots of drinking and some real unhealthy, but tasty food.  Not really our scene but fun to check off the list and move on.
Day 2 we went to Manuel's to see his clothes and meet this very famous clothes designer to the stars.  Manuel has been putting embroidered and bedazzled clothing on movie and music stars for 50 years.  Honestly it would be easier to list who he has not made a garment for from Hollywood, to Rock and Country. 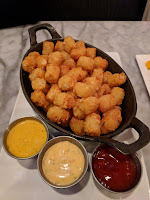 After meeting Manuel and getting the history of his career and a tour of his shop,we grabbed a Lyft and made our way over to the original Prince Hot Chicken Shack on the Eastside.  Prince's is a hole in the wall in a small strip center off the main road, today's temperature was 90 degrees and 90 percent.  We were in luck the line was short and we even found a place to sit and there we waited and waited and waited with no cooling except for lots of fans blowing hot air around.  During that waiting we chatted up with a guy that ordered extra hot and you could tell he was in both pain and pleasure I think they call that being a sadist.  Oh I forgot to mention you order Hot Chicken by the degree of hotness you want it from mild to extra hot.  After about 45 minutes you could here them call my number #65 and I jumped up and grabbed my tray.  At first glance it the breading is bright orange, they put a piece of white bread under it to absorb all the grease dripping from the chicken I had order about 6 pieces which was 2 pieces too many.  Nothing was going to stop us from finishing every piece no matter how spicy or greasy it was.  It drew us in
like an aphrodisiac, we knew it was bad for us but we just had to eat it, our guilty pleasure.

That night we went to Josephine.  Josephine's Chef Andy Little calls himself an American Farmhouse Chef who takes much of his influence from the Pennsylvania Dutch.  Josephine is in a Neighborhood called 12 South neighborhood which is made up of quaint boutiques and tree lined streets.
I cannot explain it but it seemed only a few hours before we were eating Hot chicken but Nashville makes me hungry and after eating all that chicken we ordered a couple of tasty libations and 3 starters including Roasted Carrots, Pea Toast and Swedish Meatballs on Polenta.  The Carrots were roasted and caramelized and were sweet as can be.  I only tried the pea toast because I viewed as a southern version of Avocado toast but without all the calories but since I am a carnivore my favorite was the Swedish meatballs which was a 50/50 meat combo with a delicious meaty sauce on creamy Polenta yum.  We decided to get the same first course which was Halibut on a bed of spring vegetables.  It was light moist and amazingly good.  This was a great restaurant choice and to make the night even better Ashley the Assistant GM sent over a lovely Southern Dessert of Ice Cream and
Apple Pie.  Put his on you Nashville Restaurant Bucket List.

The next day we made our hotel transfer to the Gaylord Opryland after we enjoyed a great breakfast at Makeready Libations and Liberations, not that we needed anymore food but a guy has to eat.  so after some great egg
dishes made our way to Opryland.  It is the largest hotel non gambling in the United States with 2880 rooms and almost 1,000,000 square feet it is a country music Disneyland and over this weekend it was the host to Nashville Boogie. JoAnn is involved in the Vintage Clothing Business and her company Dixon Rand had some friends who were there doing embroidery at the vintage clothing sale so it was a chance to meet them in person and take in the Rebel Life.  We were definitely not dressed for the occasion there were poodle skirts, tattooed ladies and men, two tone patent leather shoes, bluejeans with the cuff rolled up , bowling shirts, western shirts and all types of hats.
That night we enjoyed the Rockabilly Acts performing in separate venues.  My favorite act was the Pole Cats.  These guys were major stars in the late 70's and had a bunch of hits and they have not missed a beat literally.  Their lead singer was on fire, what a great show.

The next morning we got up and head back into Nashville for Brunch at Henrietta Red which is a James Beard Semi Finalist.  Henrietta Red specializes in Oysters and we had Green Curry Roasted Oysters and the Quiche of the day along with some tasty cocktails.  I have never had a more delicious Seafood item like Green Curry Oysters it is a Spicy, Creamy Savory bite that sits on your tongue for quite a while.  The Chef Julia Sullivan and Sommelier Allie Poindexter have created a great restaurant in Germantown it is very light and is open to the Kitchen and Bar.

After a great Brunch we went over the the Country Music Hall of Fame, my initial thought was boring.  But it was quite the opposite this is one of the best exhibitions of Music I have ever been to.  We were very lucky that they were showing the Armadillo Hall exhibit which showcased the venue in Austin where
every Country, Rock and Folk singer performed in the early
70's.  They had exhibits of guitars, fashion and of course music.  What a great time each time we hit a turn it was a new adventure.  They even had Elvis's Caddy,
Our trip to Nashville had drawn to an end, I can tell you there is no lack of music, food, liquor and entertainment.


Posted by topcheftrail at 2:54 PM