To make business travel fun you have to break it up with some sight seeing and exploration of the local food culture.  I had the opportunity for a stop over in Hong Kong to break up a long flight to Penang to meet with a client.  I came to Hong Kong 16 years ago on a trip to Singapore with my dad, so I was hoping that I could thread some of those memories together to navigate my way around.  But to my surprise over a 16 year period Hong Kong had grown with bigger skyscrapers, passenger ship terminals, a ferris wheel and massive development of Kowloon.  It is amazing what the Chinese have done to develop Hong Kong into a city that mixes the new with the old.

Recently one of my friends Robert had moved there with his sons so I had an opportunity to meet up with Robert for a couple of memorable dinners, I also had the chance to take a great food tour with Hong Kong Foodie Tours.  The first night I was there I got to celebrate Robert's birthday with his son's at Hee Kee Fried Crab.  Hee Kee is in the Wan Chai District where there are several Fried Crab restaurants.  The trip to Hee Kee was not uneventful, it was my first night there and I had just arrived and I trusted Uber to get me to the right location.  Unfortunately my first trip to Hee Kee was in Kowloon at a different location,  So I summoned Uber again and got on the right track and arrived at the restaurant about 20 minutes late.  The issue with Uber in Hong Kong is that it relies on GPS to get them to the right pick up and drop off.  Unfortunately there are many buildings that are bouncing signals so they often end up in the wrong place also the Uber drivers do not know the area as well as the taxi drivers, lesson learned, I finally arrived to see Robert and his two sons, I finally felt like I had arrived.  They had already started with some fried squid and some noodles.  At this point I had a moment to relax, I took in a deep breath and dug in.  Fried Crab is quite a cooking endeavor, first you get to pick your crab, 10 minutes later a large plate filled with wok fried crab covered in garlic, chili bean paste and scallions in a steamy mass.  Then comes the challenge of navigating your way through the claws, legs and body to get every morsel of goodness.  This is hard work, you have to crack the shell and dig out the meat then mix it with the chili garlic and scallions, then rest and start again.
Even though it is fried I believe that it really is a 0 calorie meal after you finish working to get a few great bites.  With our meal we had some Fried Rice with Shrimps and some Bok Choy.  Overall it was a great way to finish off the night, this time I flagged a cab.

The following day I decided to take to the streets, my mission was to find an alley where there were the traditional Wet Markets that specialize in produce and meats.  I left the Marriott Courtyard at 10am and realized I was on Des Voeux Road which is dedicated to the dried preserved foods.  These are called Preserved Markets in Sai Ying Pun district.  This included, Shrimps, Scallops, Abalone, Anchovies, Little Fish, Big Fish, Mushrooms, basically anything that could be dried and preserved.  There were rows and rows of these shops one after another, I was not sure who shopped there, why one chose one over another, whether people bought from them or on the phone or the Internet because they all look the same.  As I made my way to the

Central District I finally found navigated over to Graham Street home of the alleys where all the outdoor wet markets are.  Each vendor has either fresh produce, pork, seafood or flowers.  What is cool about this is that you can imagine 100 years ago these people's relatives stood in the same place selling the same food items.  One funny thing I saw was that there were some Raspberries from a brand we buy in California and grown in California but they were a $1 less in China 7500 miles away. 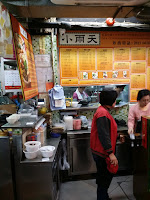 That day I noticed on a side street there were a few outdoor cart style restaurants opening up and to either side there were some more traditional indoor restaurants that were open.  Like Anthony Bourdain I took his advice and became a local, what was great I was probably the only American for 100 yards.  It was cool to be there as an observer and experience how Hong Kong working class folks ate.  I ordered Won Ton Noodle Soup, Tea and a Coke.  Everything was piping hot, I added a little Chili Oil and a drop Vinegar to my soup to spice it up, my Tea was just south of boiling and somewhat undrinkable for 15 minutes.  The soup was hearty, sweet plump mushrooms and the WonTon was stuffed with meats, the whole meal was fresh and authentic and cost less than $6USD.

It had been a long day for me I covered over 6 miles and Robert was moving into his place so we were lazy and picked a restaurant that we could walk to and coincidentally specialized in Fried Crab.  This night we did not partake in Fried Crab but we did have more Bok Choy, Fried Rice, Noodles, Char Sui and Prawns.  We dined at one of Hong Kong's famous Cantonese eateries the Under The Bridge Spicy Crab Restaurant.  I have included this link on how to cook Cantonese Fried Crab this video was created by CNN.  What I like about the more informal Hong Kong eateries is that tables are mostly communal, so the idea is not to be insecure and share a table.  Privacy is over rated unless you are on a first date, last date or proposing  Many times I find you have a new adventure with who you meet.  For me it allows new photo opportunities like the plate of Conch.

My last day in Hong Kong I spent touring Kowloon which was short but highlighted by having a beer at the  more than 150 year old Peninsula Hotel and by going on the Hong Kong Foodie Tours.  We met in the Central District and I honestly thought the tour would be made up of other tourist like me, but i was wrong to my surprise the tour was made up with our awesome guide Yammy and three private school teachers and a student from Paris studying International business in Hong Kong, Our eating team was  Yammy, The Fays, Melissa and Mary.  This was a 3 1/2 hour tour with 7 stops and covered at least 5 miles.
Our first stop was a Noodle Shop that was 20 feet from our tour start in a mostly unmarked door that led us downstairs into a locals restaurant here we tried Won Ton Noodle Soup, it was our shortest stop but it teed us up for a really great day.  At this store we learned how they made a new broth every day and that it took several hours also the noodles were hand made on premise.
Our next stop was a Roasted Meat store what was most memorable here is that this restaurant is one of the few Roast Meat stores that roasts on site.  They roast Pig, Suckling Pig, Duck, Goose, Pigeon, Chicken, entrails you name it they roast it.  How they roast it is what is fascinating.  they have these ovens that look like space capsules that cook at 750 Degrees.  A 400 lb pig will cook perfectly in 2 hours. When we went in the kitchen it was hot, there were fires pits, pod like ovens, the floor was like ice from a combination of condensation and grease from the pig.  Watch the video and see the cook roasting a suckling pig over an open flame by hand.
We then went to a shop that specialized in refreshments and jams that were used to refresh the body and remove toxins.  We sat down in this small cafe about 400 square feet, a worker was hand grinding sugar cane to remove the sugary syrup to chill and serve to customers.  One of the young ladies noticed a jelly like substance someone was eating and asked about it.  It turns out is it is rendered turtle shell that when processed creates a jelly like substance.  Like any adventurer I bought some for the table so we could all enjoy it.  We

honestly expected it to be awful but it tasted like warm black tea jelly a little bitter till you add a bit of honey, it was pretty good.  Now it is a little weird that it is rendered Turtle Shell but it turned out OK.
One of the last stores we visited was a preserved fruit store.  Yammy told us that as a child her parents gave them these preserved fruits as treats or dessert.  My favorite was the Preserved Ginger, it was a little sweet but it had a nice hot spice that you tasted on the back of the tongue.  I bought 1 pack of the ginger and have already texted my buddy Robert to buy me 10 more packs.
Hong Kong is an eating adventure, it is quite affordable and the foods are amazing
Posted by CJ at 3:41 PM