This is the first time I had been to Penang that I know of.  I was born in Singapore, my mother moved to China when she was 16 and was married in Singapore when she was 24 and moved from there when she was 27.  So i possibly could have been in Penang but I do not remember.  I was excited to have a business trip there to meet with a prospective client.  We had prepared for several weeks for our meetings and were very excited to meet with the folks that we had previously met only by phone.  Penang is an Island off the coast of Malaysia and is a state of Malaysia.  It has been a mainstay of American manufacturing since Hewlett Packard's founders established a presence in 1972.  The island is a mixture of new and old and is world renown for it's food culture.  There is a great mixture of Malay or Nyoyan, Indian and Chinese cuisines.  Our client were gracious hosts and made sure that we would really enjoy our stay and sample all the great cuisines of Penang.
My colleagues and I all arrived on Sunday and decided to to enjoy a local famous Fish Curry restaurant conveniently near our Hotel in George Town call Fish Head Curry.  It was late on a Sunday evening and we were a little worried that we were the only folks in the restaurant.  We were lucky to have a colleague from Kuala Lumpur that could navigate the language and the menu.  I ordered the specialty of the house which was Fish Curry.  The Curry came in a clay pot and had large chunks of fish, beware the bones were still in the fish so you could not chomp down.  The curry was full of vegetables, potatoes and had a little heat served over some white rice and I enjoyed it with a local Tiger Beer.  One of my colleagues ordered the Fried Chicken which as described was fried but also had a great spice to it, we combined that with a bowl of seafood fried rice.  Honestly a great meal and also less than $20 for all 3 of us.

The following day our client took us to Dragon I which is a small chain of Chinese Restaurants.  they are famous for their noodles which are hand made.  They made sure we did not go away hungry we had Noodles, Fried Rice, Soup Dumplings, Pork Belly, Shrimps a total feast.  This restaurant is known for their Soup Dumplings which is a dumpling with meat and a bit of soup, you have to handle it very carefully to get the explosion of goodness. 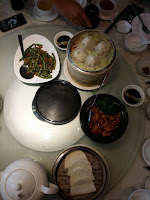 The following night we went to Batu Ferringhi a tourist haven know for its night market of random clothes accessories and everything imaginable, Rolex for $100! Ha. We went to one of the Beach Front restaurants the Golden Thai.  On a busy night this restaurant could easily seat 1000 people, it has a stage where you get a cross cultural dancing and song experience.


I had a mission that night to leave part of my Mom in Penang a place she always told us how much she enjoyed.  The restaurant was on the beach and my friend Koushik was kind enough to take some pictures as I left a little piece of her there.
The Golden Thai is a seafood restaurant that allows you to pick out your dinner from the aquarium so they can prepare it to your order.  I thought that it would be good to get some Lobster, rarely are you in a place where food is cheap so why not take advantage of it.  I told the lady to pick one out but she was insistent on me doing it myself.  I found a nice 2KG Australian Lobster and had her weigh it and quote me the price $200 USD...What... Well how much are the Tiger Prawns $20USD we will have the Prawns.  I shared the Prawns with VF and we had some other items including Chicken with White Mango.  Overall this was a great location to eat, it was a nice breezy night at the beach and the entertainment on stage was great.
The third day was a great food experience our client first took us to a Southern Indian restaurant where we ate on a Banana Leaf, the food included Fried Cauliflower, Chicken Tandoori, Naan, Rice, Chicken Curry, Omelet which is kind of a crepe and a delicious Mango Yogurt Drink.  The Fried Cauliflower was hearty and almost like a big chunk of meaty protein.  Typically you would eat this food with your hands but all of us had to get back to work and did not want to have to deep cleanse.

beach and catered more to the locals than the tourists.  Wah Bin our host for the evening had been their with her family for holiday treats, the menu was more authentic and had some things on it that I never would have tried unless we had been introduced by a local.  We started off with Chicken Satay, followed with fresh Prawns, Crab Shells stuffed with Crab, Cheese and Bread Crumbs and then baked, Noodles, Rice Baby Chickens, Thai Coconut Milk fresh out of the shell.  The highlights of the evening were the Baked Stuffed Crab Shells which were rich and had a nice fat content from the Cheese and I suspect the brains of the Crab.  The other special was the Thai Coconut milk, it was ice cold sweet and spicy it was very refreshing.

On Thursday Rich our client took us to his favorite place Kapitan in the Indian district in downtown Penang.  This is definitely a locals place, it is covered but open to the outdoors fans try to keep you cool but it is 92 degrees and their is a massive Stone Tandoori Oven that provides additional heat.  there are all different cultures eating their and in the background you can here the prayers from the local Mosque over their loudspeaker.  We all order
Tandoori Chicken plates and share a few other things including Fried Chicken.  The Chicken is served on a tin plate with sauces to dip your Naan in overall a very satisfying meal for $6.  The real charm of the place is its location and authenticity.  Rich guided us back through an area of Penang that was a combination of Chinese, Indian, Muslim all dating back to the 1800's.  Overall a very satisfying night.

Our last day in Penang our client took us to the Penang Country Club to enjoy a Pan Asian meal of Noodles, Satay Rice and a desert called Ais Kacang which is a combination of shaved ice soaked in a sweet rose water covered in Grass Jelly, Peanuts, Lychee, Red Beans, Corn, Condensed Milk and other goodies.