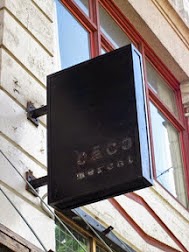 Our weekend had just begun and after our great afternnon we headed out to dinner at Baco Mercat which is named for it's Baco which is flat bread loaded with meats, cheeses, yogurts and spices developed by Owner Chef Josef Centeno.  As people are discovering Los Angeles is quickly becoming the restaurant leader in the west.  There are more and more new restaurants with chefs coming from other regions to make their mark.  Chef Josef started his career in NYC and has gained notoriety with his restaurant groups terrific menus.  Baco Mercat is right in downtown and it is decorated in the manner of the ever growing public house craft style.  Nothing fancy just focusing on great food.  What makes these restaurants different from others they do not get hung up on one menu for the year, they are constantly changing it up to feature what is fresh and seasonal.  Baco Mercat can be tackled in two distinct ways starter and entree or small plates which is my preferred eating ritual.


Our server Katherin provided some excellent suggestions and steered us with 5 choices.  Baco Mercat really features vegetables and so we started with the Baby Yellow Beet Salad.  We have become to love fresh beets, when combined with a little spice, some vinaigrette, yogurt and sumac it really tests the taste bud and helps cleanse the palette.  Next up was the Caramelized Cauliflower which as far as I am concerned was the star of the night.  It tasted hardy, it had heat, it had the yogurt to cut the heat it had fennel to make it complex.  It still hangs on my palette, if it was the last dish of the night I would have been satisfied, but it wasn't so up next was the Hand Torn Pasta with Pork Belly Sugo.  I love anything Pork Belly because it is so sinful and so it was.  Home made sheet pasta, with Kale (to Balance out the Sin of the Pork Belly Sugo), Soujouk and Pine Nuts.  This dish was another creative home run with it's heat and Mediterranean hints.
I love a meal when your tongue is woken up with several tastes in succession.
On came the Blistered Green Beans with chunks of fresh roasted tomatoes, Fenugreek and Basil.  This dish was refreshing but I remember saying to myself that I could make this and probably will provided I can find the Fenugreek.  The final dish was the soup and it was worth waiting for because it was the combination of good things that are not recommended by the AHA but are very satisfying to indulge.  The broth was hearty and salty the meat had the right amount of fat and was tender, the soup was more of a stew and had many textures, pasta provided some bulk, the mushrooms were mini sponges and added additional texture it was topped with a sunny side up egg just waiting for the yolk to be broken to provide a richness and some fresh cilantro to ad a little bitter peppery bite. Overall it was more of a spicy stew something you might find in New Mexico, it was a great finishing dish.
Baco Mercat is a very good restaurant comfortable ambiance, great staff and above all great consistent food. This is the type of restaurant every big city should have.
Posted by CJ at 11:19 AM