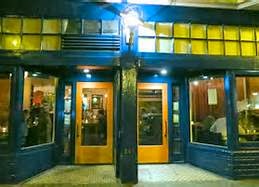 We took a quick two day trip to San Francisco and was lucky enough to get in one of the hardest reservations in the city Bar Tartine.  Bar Tartine is in the Mission District which has established itself as the in place for San Francisco urban living.  Both Mission and Valencia streets have the newest hippest restaurants, bodegas and retail shops which are primarily focused on providing services to the residents not necessarily tourists.  Bar Tartine's Chefs Nick Balla and Courtney Burns have earned significant accolades, I see them as this new breed of Chefs that are bringing the world to us one taste at a time.  Bar Tartine does not have significant signage and will not over whelm you with formality it is designed in the public house genre and is in existence to serve interesting, complex and great food.  I like restaurants like this because it sets new standards in creativity and qu
ality and will push the dining experience.  Like others I have reviewed in the last year Bar Tartine was a semifinalist in James Beards 2013 List and I was not disappointed.
﻿﻿Half of a great restaurant experience is working with your server to make sure you order the right things ours was Katie and she was a very good food guide.  Bar Tartine is a family style restaurant which happens to be my favorite kind because I can share without getting in trouble.  We started with the brine pickled root veggies mostly colorful Beets and Carrots which was a good palate cleanser.  This was quickly followed by the Smoked Potatoes with Black Garlic which was the memorable food we had eaten in months.  It is one of those seemingly simple dishes that you can still taste one week later because it left it's own signature on our palate.  We had ordered a spread of Cultured Squash in Sunchoke Oil which accompanied the most amazing bread I had had.  The bread baked at Tartine had the moist texture of a great bread pudding and was so sweet and flavorful.  The bread needed no topping it was great by itself.  Next up was Kale with Sunflower Tahini, Rye and Yoghurt this is a healthy dish I have a hard time remembering without a picture prompt, it was good but it was not as memorable as other parts of the meal.
﻿
The entrée dish was Green Chili Fisherman's Stew with Collards.  This is a dish that has several flavor profiles that unveil themselves after your first bite.  This is a very complex dish first you taste a fresh green bitter bite of the collard followed by savory meat base broth coating the tongue, then a subtle but growing green chili bite.  This dish was very good the fish was firm and very fresh, there were broth soaking mushrooms fresh vegetables making this dish the star of the night closely followed by the Potatoes.
Dessert was on tonight and we started with Carob Mousse with Goat Cheesed and Black Walnuts followed by Pound Cake with Sweet Potato Pound Cake and Chestnut.  The Carob Mousse was perfectly unsweet and savory every bite was awesome, the Pound Cake with the Sweet Potato Ice Cream was perfectly sweet with that yoghurt bite.  honestly I had never had desserts that were so fulfilling yet did not make me feel guilty that I had it.  It was just wonderful food!!
So if you have a chance to get into Bar Tartine you should grab it this a great experience with a nice local vibe.
Posted by CJ at 12:27 PM