There was no better season of Top Chef that the one with the Voltaggio Brothers.  They were the ones that were competitive and creative.  This week I was lucky enough to score a reservation at Ink in Los Angeles, Michael Voltaggio's restaurant on Melrose.  I was excited to get a chance to go to a real Top Chef's restaurant is is the namesake and the premise of this Blog.  Ink is not a fancy environment it is open and not cramped, nothing fancy.  There are 2 choices when you go there the Tasting Menu or Small Plates.  We went with the the small plates to get the variety of the menu.  Our server Jessica was very helpful she suggested that we order 3 plates each which we did.  There are both cold plates and hot plates and the consensus was that the cold plates were marginally better than the hot plates.  We started out with the Shishito Peppers, Crab and Beef Tartar.  The larger the pepper the sweeter, the smaller ones packed a little heat the peppers were sprinkled with Almond-Bonito Sand which was cold and sweet the plate was topped with an edible yellow flower.  The Crab was one of the stars it was wrapped with a thin layer of Avocado and covered with Oyster Mushroom Chicharron and micro vegetables that add a little spice.  Another star was the Tartar it was rectangular shaped with Hearts of Palm and a Sea Bean Chimichurri.  Each of these dishes had a flavor surprise and really worked the palatte.  The Meipeque Oysters topped with Mignonette Ice were accompanied with an Oyster leaf which if you were to close your eyes you would have a very difficult time telling the difference between the Oyster and the Leaf.  We then had the Brussel Sprouts and the La Quercia Berkshire Ham, the Sprouts were cooked in Lardo Pigs Ear Chicharron with a spritz of Lime and Apple. The Ham was like a fine Prosciutto that melts in your mouth, it was served with a Manchego Cheese Biscuit.  I am getting full just writing this!!
We wrapped the night of with 3 hot dishes the Sturgeon, the Pork Belly and the Lamb Shoulder.  The Sturgeon was the best looking dish and perhaps the most complex dish.  There were 6 or 7 small asparagus wraps filled with egg yolk on top of the Sturgeon the Sturgeon was bathed in an Asparagus Green Tea.  The Sturgeon had this great moist thick texture and was infused with the sweetness of the tea.  By the time we had eaten all these dishes we were getting a little stuffed so I can't honestly provide the last 2 plates the review they probably deserve.  The Lamb Shoulder withVadouvian had the essence of Curry it was served with Lamb Tongue something I never have tried, it had a lot of flavor but I will not develop a habit for it.  The Pork Belly was a great plate and had great flavor it was at a time where it was just food and sensory overload. 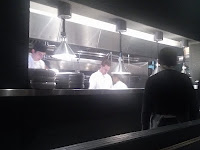 As you can tell we really enjoyed Ink this is a must see when you go to LA, I told the Concierge Mike at the JW Marriott at LA Live that it is a must go.  BTW Michael Voltaggio is a great host and chef.
Posted by CJ at 6:10 PM