ABC Kitchen and a few more 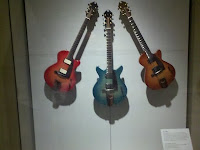 This was a big week of entertainment in New York, Spiderman, That Championship Season, Addams Family, St. Patrick's Day Parade and Elton John. So really it was not a big week of eating we had a couple of repeats Osteria Morini http://osteriamorini.com/. This Michael White restaurant again was very consistently great providing great food at good value. Only new dish tried was the Salsiccia, clay baked polenta with pork sausage and strachinno cheese. My only words for this dish are rich, tasty and awesome.

Before the Elton John Concert we went to the Eventi's house restaurant Jeffrey Chodorow's Bar Basque http://www.chinagrillmgt.com/restaurants-and-bars/bar-basque. Bar Basque is a Spanish restaurant and since we were under the gun for time we had their tapas. Our first dish were ham croquettes which are far from healthy but that is what makes these deep fried morsels filled with melted cheese, peppers and hamso delicious. We followed that up with the mushroom croquettes that were filled with mushrooms and cheese, and 2 types of empanadas one filled with chorizo and the other filled with piquillo peppers. one Vote for the Chorizo. We wrapped the meal up with their shrimp saute which were cooked perfectly. Overall much better than hoped for.

Let's talk about the star restaurant of the trip, ABC Kitchen. this is Jean George's restaurant that is adjacent to the ABC fabric and Design store http://www.abckitchennyc.com/. ABC Kitchen's concept is fresh, organic and local ingredients. The restaurant from it's foundation to fixture, to silverware and plates is either recycled, repurposed or salvaged. It is a cool concept that really works. By the time we left our play and arrived at ABC it was 10pm and the restaurant was very crowded. ABC is the place to be seen these days with a mixture of the famous and not so that mingle as if they were all the same. Let's get to the food we started with the Clam Pizza (sounds weird) with green chili this is a must have dish light and very flavorful. for the main dishes my wife had the Black Sea Bass with green chili's and herbs and I had the Lobster with lemon chili vinaigrette. My wife made the much better choice. Overall the meal was great, the service was good and the look and feel of the restaurant was French Farmhouse.

Okay here are the reviews Spiderman is Awesome music is soso but the spectacle is one of a kind, That Championship Season play is dated, Keifer Sutherland is great, Brian Cox and Jason Patric are good but Chris Noth and Jim Gaffigan are just ok. Addams Family was fun but boring but think about it is you are over 45 you already know the story. Last but not least Elton John,Leon Russell and Greg Allman. Elton John still has the chops. Last time I saw him was when I was 17 at the Hoffheinz Pavillion in Houston in 1973. This was a great concert, Leon Russell had been inducted in the Rock and Roll Hall of Fame that day and performed flawlessly and there was a guest appearance by Greg Allman who was in town for the the annual Allman Brothers tour. St Patrick's Day Parade. What a great night, what a great week.