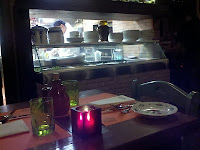 Six months ago I had no idea who Michael White was. When we were at the Food Networks Wine and Food Event in New York we went to an discussion sponsored by the New York Times, and it featured Jean George, Daniel Baloud and Michael White. Michael White was the newcomer and was getting raves for his restaurant Marea. Anyway my wife had heard of his restaurant Osteria Morini http://osteriamorini.com/ so she decided to make me a reservation. Osteria Morini is in Soho and it would be wise to get a reservation unless you get there early. You can eat at the bar or in the main dining area. I chose to eat in the dining room I was situated back by the glassed in kitchen so I could see the chefs preparing the meal. When I sat down I felt like I had gained the 40 pounds that I had lost because the tables were to low to sit close comfortably. After I got situated my waiter finally made himself over to the table he seemed in slow motion and definitely not the life of the party. As I sat there the restaurant started filling up and it became very alive with young adults (I was beginning to feel old).

Now to the good part let's eat. At Morini you can order a series of small plates and that was the course I took. I started with the Zuppa Rustica which consisted of Farro, Beans, Porcini and Sage it was delicious I actually wiped up the last morsel with the fantastic bread they served. I was eavesdropping on the table next to me and they were raving about the meatballs. I decided to order the Polpettine which Prosciutto and Mortadella Meatballs baked in tomato sauce. Another innovative plate which I also wiped the remainings up with bread. To top it off I had Lumache which was Wild Boar Ragu on homemade Lumache pasta. the boar was slow cooked and there were morsels that fell apart in your mouth. the sauce was slightly sweet and had this taste that sat on your palate long after I was finished. This again was a home run dish.
Since I had been eavesdropping I decided to tell them that they had been my inspiration to order the meatballs. We got into a conversation a low and behold they worked for the Michael White Restaurant group. They were from the New Jersey location and told me that the restaurant in NJ is a lot older and also has some great food. The chef came out and talked to them for a while and I took the opportunity to compliment him on the great meal. I will definitely go back.
Posted by CJ at 7:25 AM