It is Saturday and today is a big day we have 2 events the first is a day with two of Food Network's newest stars Melissa d'Arabian and Aarti Sequeira at the Food Network's Chelsea Market studio http://www.nycwineandfoodfestival.com/2010/event_detail.php?id=24. 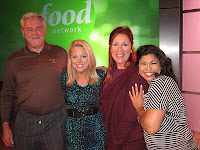 They teamed to cook a meal of Carrot Ginger Soup, Red Lentil's and Rice, Pan Fired Halibut with Chimichuri Sauce and a Chocolate Ginger Pudding Pie. The event was hosted by the De Gustibus Cooking School http://degustibusnyc.com/ and moderated by its owner Sal Rizzo. This was a very small event where both Melissa and Aarti teamed to cook some of their favorite dishes while staying true to their brand. Melissa featured her meals for $10 and less and Aarti featured dishes from her Indian heritage. Sal Rizzo was the host and interspersed questions for both ladies and encourage the audience to do so also. There was a fantastic Rhone region wine was served by Chateau d'Esclans http://www.chateaudesclans.com/vente/achat/produit_details.php?id=2

What I learned at their event was that both of these ladies were accomplished before they ever competed for the Next Food Network Star, Melissa worked for Anderson consulting and Aarti worked for CNN while doing a documentary 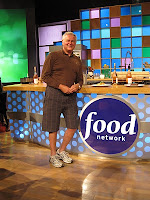 about Darfur, going to culinary school and working as an intern once a week at a restaurant. Bottom line these ladies are focused.


After this event we went shopping in Chelsea Market which I would describe as 50% for local residents and 50% for tourists. I would recommend that if you are looking for some items for your kitchen or are planning to have dinner at a friends, Chelsea Market is a great place to visit. 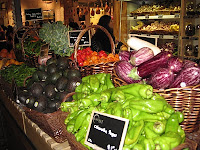 During the day one of our new found acquaintances told us to visit Eataly http://www.newyork.eataly.it/. Eataly is one of the

greatest markets we have ever been to. It is a new 50,000 square foot gastronomic event that is an interactive market/restaurant. There was actually a 15 minute wait to get inside and buy stuff. Eataly is co-owned by Mario Batali and Lydia and Joe Bastianich, Joe was walking around surveying how things were going and was very easy to approach and talk to ( I asked why he was always mean on Gordon Ramsay's Reality Cooking Show, he said they probably deserved it tongue in cheek). They feature several stations Fish, Meat, Cured Meats, Cheese, Vegetables, Coffee, Pasta to name a few where you can buy the highest of quality foods combined with open to the market restaurants that you can enjoy each of the featured proteins served with wine or beer. We could not resist the opportunity to climb up to the counter that served grilled vegetables and have a mid afternoon snack and drink. Only another 1000 calories to walk off. 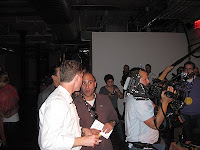 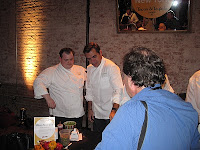 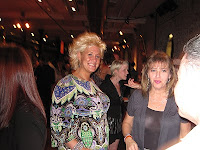 http://www.nycwineandfoodfestival.com/2010/event_detail.php?id=64. This was a private event for 1000 of Bobby Flay's closest acquaintances. There were 30 taco stands hosted by New York's great chefs and many of the Food Network stars. It was a chance to rub elbows and have a good opportunity to meet the people you see on Food Network and the Travel Channel. The food was great, the protein of the night was Pork and the most unusual was Octopus. As you can see there were a lot of the Chef Celebs doing the meet and greet and the one thing we noticed for the most part they were very approachable. The only person that did not circulate at all was Guy Fieri I guess he is above it all. I only hope next year they either limit the attendance or find a larger space but overall it was a very good time.
Posted by CJ at 12:08 PM